The company was founded in January of 2000 as the sales and marketing arm of the Rootmaker® Root Branching System. In 2000, the company set up offices in Huntsville, Ala., where it continues to operate.

Dr. Whitcomb, inventor of RootMaker® Products, holds a Ph.D. from Iowa State University and was a professor at Oklahoma State University for 13 years. An expert on plant root systems, he has been published in hundreds of trade and technical magazines. He is the author of four books, including "Know It and Grow It" and "Plant Production in Containers." He holds 26 patents, including "Dynamite Crapemyrtle" and many container designs.

A distinguished researcher who discovered air-root-pruning, Dr. Whitcomb has received dozens of honors from groups such as the American Association of Nurserymen, the Oklahoma Horticultural Society, the International Society of Arboriculture, the Association of Garden Writers and Nursery Business Magazine.

Wayne Hinton met Dr. Whitcomb more than a decade ago while operating a nursery in Tennessee. With Wayne handling the marketing aspects, the two forged a partnership that led to the creation of RootMaker®. 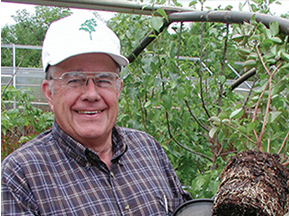 Dr. Carl E. Whitcomb received his Ph.D. in horticulture, plant ecology, and agronomy from Iowa State University in 1969. He was a professor at Oklahoma State University 1972 - 1985, then began his own horticultural research company, Lacebark Inc. Root constriction pruning grew from a chance observation in 1967. He was the first to perform air-root-pruning in 1968 using milk cartons with bottoms removed. This eventually lead to RootMaker®, RootBuilder®, RootTrapper®, and Knit Fabric In-Ground Containers. Accomplishments include: four books (Plant Production in Containers II, Production of Landscape Plants II (in the field), Know It and Grow It III, and Establishment and Maintenance of Landscape Plants II), 26 patents (container designs, Dynamite® crapemyrtle, etc.), papers published in several hundred journal and technical publications, and numerous nursery industry awards.

Discover the Rootmaker difference! Download our full-color catalog, which includes our complete product line and shows all the different ways to use our products, and find out how to become a Rootmaker Certified Grower.